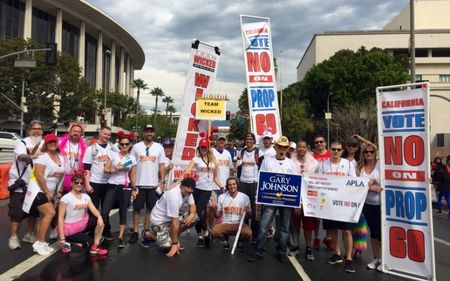 The event will be held at 10 a.m. on October 21 at Grand Park in Downtown Los Angeles. Media professionals interested in participating or covering Team WICKED may email Press@WickedPictures.com.

"It is a passion of mine to raise funds and awareness about the impact of HIV and AIDS,” drake said. “I am calling on our industry colleagues and friends to join us at AIDS Walk Los Angeles and to make a difference in many people's lives. I hope to see everyone on October 21st.”

With last year’s donations reaching nearly $14,000, Team WICKED has raised more than $106,000 over the last six years, making it one of the top fundraising teams at the annual benefit presented by AIDS Project Los Angeles (APLA). Each year, Team WICKED is comprised of adult stars and personalities from the adult industry who are dedicated to raising AIDS awareness and vital funds for AIDS charities.

“Team WICKED continues every year solely from the caring and dedication to the cause of jessica. We thank her and everyone that supports us by walking, donating or both.” said Steve Orenstein, owner of Wicked Pictures.

Besides her continuing work with Team WICKED and other charitable causes, the acclaimed wellness advocate and activist is a frequent contributor to media outlets as well as a highly sought-after sexual wellness speaker and educator who lectures at universities and leads seminars and workshops around the world. She is the writer, producer, and director of the series “jessica drake's Guide to Wicked Sex,” which has received critical acclaim from industry stalwarts AVN, XBIZ, Fleshbot.com and others, as well as mainstream outlets like The Huffington Post, Cosmopolitan, Refinery29 and many others.

The world's first AIDS Walk was developed by Craig R. Miller in 1984, during the height of the AIDS epidemic. Seeing the need for immediate action in response to this public-health emergency, Miller sought to fill the void left by the government's negligible response to the crisis. Drawing on his experience as a political and community organizer, Miller's approach combined grassroots activism with fundraising and other campaign strategies to raise both awareness and urgently needed funds for the fight against AIDS. Miller brought his idea to the fledgling AIDS service organization, AIDS Project Los Angeles (APLA), who hired the young activist to produce this new event. Miller and APLA expected to draw a crowd of 1,000 supporters and raise $100,000 for this very first AIDS Walk. On July 28, 1985 in Los Angeles, 4,500 courageous and visionary people assembled at Paramount Studios and raised an astonishing $673,000. Since 1985, AIDS Walk Los Angeles has drawn over a half-million participants who have collectively raised more than $72 million for APLA. The event serves as a model of grassroots fundraising and community activism for organizations across the United States. For more information, visit AidsWalk.net.

A charismatic public speaker, the same demand for her modern sex education DVDs also takes jessica around the world - presenting seminars and workshops at expos, retail outlets, and colleges like USC, UCLA, and Chapman University – where she speaks to curious adults desiring to learn more about sex, romance, and communication. jessica also continues to be a paramount voice for sex workers across the world - she’s spoken at the Let Us Survive March, a rally for sex worker rights, and is a continuing sponsor of one of the first summits for sex workers, CatalystCon.

While jessica is certainly a performer at heart, her passion for sex education, advocacy, and inclusion are just as potent. “My passion comes from personal experience,” she states candidly, “from the idea we are all connected.”

For media requests or to interview jessica drake please contact: